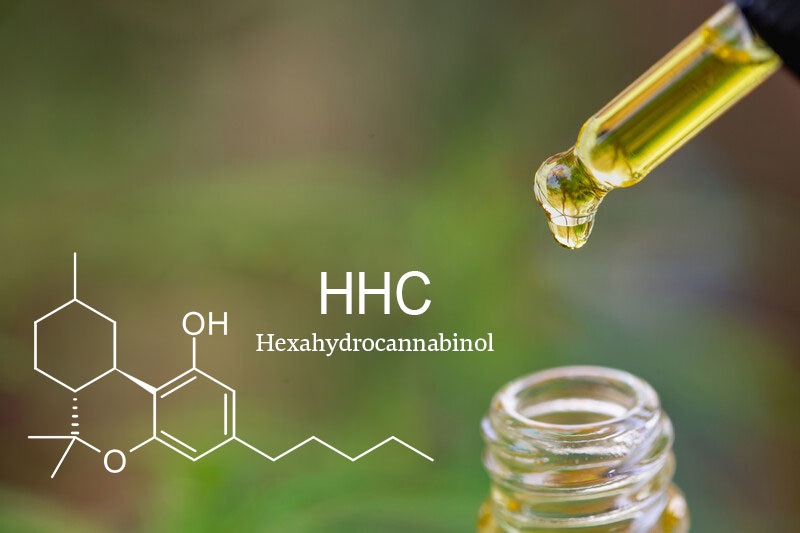 For the past few years, the cannabis industry has been intensively searching for other, lesser-known cannabinoids to compete in the diverse cannabis market. One of the newest and most promising is hexahydrocannabinol, referred to by the acronym HHC.

HHC is a related substance to THC, with similar or even the same effects as the latter. Importantly, HHC has one important legal advantage over delta 9 THC and delta 10 THC: it is not THC. It is a substance that has been known to science for quite a long time, but until recently, not very often has its subject been discussed by cannabis enthusiasts. HHC is a naturally occurring cannabinoid; it is found in fibre cannabis, but in quantities so small that its extraction is quite expensive. As commercial production of HHC is only in its infancy, it is not that popular for the time being.

How is HHC produced?

HHC was discovered in the 1940s by chemist Roger Adams. He created HHC by adding hydrogen to the THC molecule and changing its physical properties. This process, called hydrogenation, was first described in a 1947 patent document.

Hydrogenation modifies the delta 9 structure of THC by replacing the double bond with two hydrogen atoms, which changes the molecular weight and increases stability. According to Mark Scialdone, chemist and scientific director of BR Brands, hydrogenation improves "stability and resistance to thermo-oxidative decomposition" - meaning that HHC has a longer shelf life and is far less susceptible to UV and heat damage.

Does HHC produce an effect like THC? Does it have side effects?

It's a bit complicated. Although HHC is not technically THC, it can produce similar effects - if you use enough of it. After extraction, the finished HHC is a mixture of active and inactive HHC molecules. Active HHCs bind well to the body's cannabinoid receptors, others do not.

Beginners and less sophisticated manufacturers have yet to develop a cost-effective way of separating high-powered HHC from its low-powered twin, so such unsourced HHC - which is a mixture of the two forms - can be something of a miss for the buyer. However, HHC undeniably has noticeable effects. User reports typically describe it as 70-80% of the effects of classic THC.

Virtually everything we know about the effects and side-effects of HHC is anecdotal. Nevertheless, users report the same range of side effects at too high a dose that are familiar to delta 9 THC users: anxiety, dry mouth, dry and red eyes or hunger.

Will HHC show up in a drug test?

There are many indications that HHC may not break down in the body in the same way as THC. Unlike the delta 8, delta 9 and delta 10 forms of THC, there is some evidence that HHC does not metabolise to 11-hydroxy-THC, which is the substance detected in many drug tests.

However, this has not been tested and is not certain. So far, no one knows with absolute certainty whether HHC will leave traces of use in blood, urine or hair. If your employer conducts drug testing, we suggest that you do not take a risk by using HHC.

Does HHC have a medical application?

HHC has not been extensively studied, unlike more common cannabinoids such as delta 9 THC or CBD, but there have been some promising studies. A 2011 study found that some synthetic hexahydrocannabinol (HHC) analogues "strongly inhibited angiogenesis and tumour growth induced by breast cancer cells". In 2007, Japanese researchers published a paper describing HHC's impressive ability to block pain in mice. However, it is probably too early to tell whether HHC has much use as a therapeutic drug.

Is HHC legal and will it remain legal?

HHC occurs naturally in the fibre hemp plant and remains legal in many US states, as well as most European countries. Products with HHC, contain below the legal limits of 0.2% THC.

Where can HHC be found?

Only a few European manufacturers produce HHC and offer it wholesale, and the fact is that not many companies produce it. Consequently, only a few companies, including SaltyPot™ offer HHC at retail, and only recently.

A quick Google search found several online retailers offering various HHC products. Most of the vendors offer better or worse quality vape cartridges filled with HHC wax. This is because it is important to remember that not every cartridge is suitable for such dense substances, and manufacturers often go for the cheapest solutions. At SaltyPot™, HHC oils, dabbing concentrates or cannabis flowers with HHC are also available.

If HHC continues to be legal, and especially if high-potency HHC production becomes less costly, this promising cannabinoid will become more accessible in a diverse cannabis market.